A downloadable game for Windows, macOS, and Linux

Yet Another RPG Game

For bug report, ideas and anything else

Until 17/11/2016 Grab Yet Another RPG for a special price and support others indie developers!

In order to download this game you must purchase it at or above the minimum price of $2 USD. You will get access to the following files:

Started playing. Got to level 6, really enjoying it. Shut it down because I needed to work on something else. Brought it back up an hour later. Put my player down to level 2. :(

Is there a single button that saves the current progress or something ?

When does the game save your progress ? Also have 8-chests that cannot be opened. This is from the version I downloaded on 06-19-19.

Here is the chest problem again. 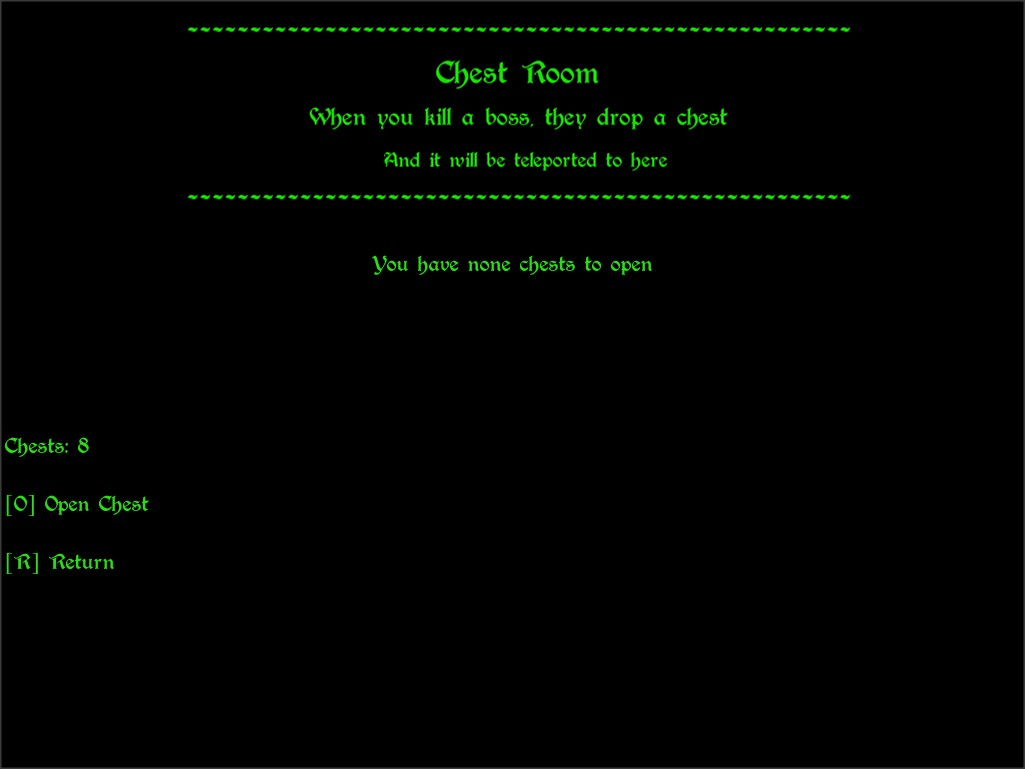 Upgraded the Search For Scraps, the game now lets you search even if your stamina is zero. I may get to the 200th level of the dungeon as you promised there are available, but I will be riding the coat-tails of errors in the game to do it ! :)

... got to floor 211. Game did not end after defeating final boss. I press "F" for Find monsters and it makes the key sound but does not enter combat.

Is the game over and won with no final boss or ending screen ?

Starting a fresh tab and new game. I died in the first boss battle. That's fine but when it returned back to the main menu, the boss music continued as well as the main (both playing simultaneously).

I shut down the EXE and reran it. Won against the boss this time. Got a chest. Opens in the chest room (likely prior error is fixed since this happens !). Got a sabre. Going to try and play this to conclusion to see if there are any more bugs - but I think you got 'em ! :D

Nice!, will see that about the music, odd. i was sure that i have an if for that XD

Problem - in player's favor. From the 2-chests, I opened one and it said, "You already have a saber. No worries. Here's 5 coins." I exited the Chest room and returned and it acted like I didn't open any at all, showing 2-chests again.

Additionally, in the Pit, you have no option to upgrade a Scimitar (and likely other weapons), only Knife, Dagger, and Rapier. Suggest you have option to upgrade all possible weapon types at cost of additional materials needed for conversion. Oh wait, I see ! You have to earn them through upgrades. Ok, so this part is fine.

You might list them anyways and say that these cannot be selected until you have paid to upgrade the Pit.

Augh, it's doing it again. I have 3-chests now from the last boss battle. Enter chest room. hit "O" acts like no key was hit. No sound, no gift, and no removal of chest.

Went back in dungeon. Came back, tried Chest Room. Now it says I have none chests to open despite showing 3.

Is there a way I can send you my save file so you can debug it from there, Victor ?

would be nice if you can record and send me to take a look on what steps you take till the bug. or something like that.

If I can send you the SAVE file, you may be able to determine it from there ... or did you want me to record the screen ?

All I'm doing is grinding in the dungeon for a-while till my healing potions run out. I go back, buy some more, finally hit the boss. Beat him. Go to the Chest Room, try to open a chest - and it doesn't work.

If you'll let me know where the save file is, I'll send that to you.

Thats ok. i am about to finish my current project then i will have time to take a look at the bugs you reported.

How do I get the full game ?

Purchased. Thanks. Is there a way to go full-screen with it, to make the text larger ?

Also, think I found a bug. When you defeat a critter, a menu appears.

If you press "A" from here, you get even more experience and coins. You can tell this happens because the display changes and you hear the key click sound you do for attacking.

Also, is there a way to save your game so you can quit and later return to it ?

Another problem. I had 3 chests. I Hit "O" to "Open Chest" and it buzzed and said, "You have none chests to open." yet it took a chest away nonetheless. No fair !

You can purchase Grass Armor and they will take away your Gold armor. Suggest that a check is made to ensure you are not purchasing an inferior weapon or armor.

The next time I got more chests, I click "O" to "Open Chest" and no sound or message appears, it just takes one of the chests away.

Hi dw817, thank you for your purchase!

i will take a look at the issues.

yes, the game saves, you can leave and play later without a problem!

hi, i was able to reproduce the issue #3 and #5 and fixed, if you feel wronged, you can mail me @victorperico@gmail.com and i can make a compensation for you!

Trying to open my one remaining chest. Not getting anything at all, Press "O" no sound effect, but at least it doesn't take it away now.

Suggest when you post you use a version number. When I write games apps or lengthy notes, I usually include the date it was updated or written as part of the filename or information and that is the "version" to keep track of.

Okay, suggest a message appear in the game WHEN your game is saved so the player knows. Especially would be nice, player gains level, message appears, "Your game has been saved," especially if the game is only saved here.

In The Pit, suggest you display current weapon and armor so the player can see what they need or don't need to upgrade.

When purchasing a weapon or armor, it is standard, at least with Dragon Warrior to get some money back for the "trade-in" purchase of your inferior weapon or armor. If this is already happening, add text to display. "The merchant gave you ___ coins for your ___ and replaced it with the newly purchased ___."

Option to convert scraps to coins for desperate player who needs REST at Inn.

You are mentioning you are doubling the purchase price of the Inn each time ? That can get expensive rather quickly. Suggest it is like Final Fantasy Legend 1 where player is charged according to how many hits and stamina they need to recover. This will naturally be more expensive as the player needs more recovery in higher levels.

There is no magic, in my S2, I had Runestones of Fire, Ice, Bolt. Creatures were strong and weak against them based on their element type. In projected S3 there is also Mystic which is strong against all types, but harder to acquire.

There is precious little story after you solve the initial quest. Suggest new story for each "boss" in dungeon. It's just text but adds to the game and encourages the player to explore the dungeon further.

Suggest Inventory and Stats be combined to one page. Possibly call it Stats or Condition.

Projected in the future, it would be nice to have found companions join in combat - and to have more than one critter attack at a time, especially bosses.

Sorry for the late reply.

Good suggestions! have noted them here. i am currently finishing another game, once it's done i will go back to Yet Another RPG Game and polish somethings.

Ah, smells like my youth. That game pulled me into old times, when games had deep and astonishing gameplay, not only pretty graphics like today. You play as a dungeon explorer, you kill different monsters, floor by floor. You became stronger and choose different options, upgrading your weapon. Reminds me text quests from Space Rangers, but in Medieval setting. Thx to developer, that someone still creates old-fashioned games. 9 dead rats out of 10. 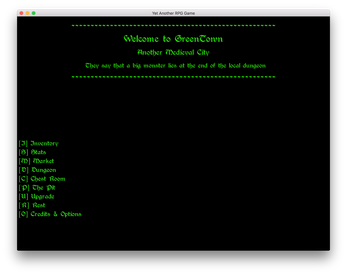 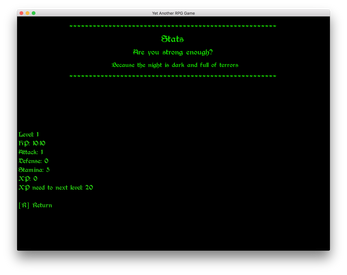 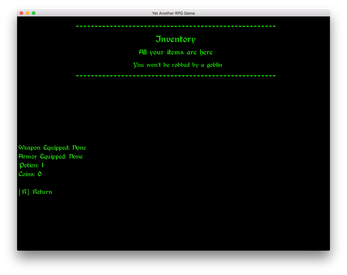 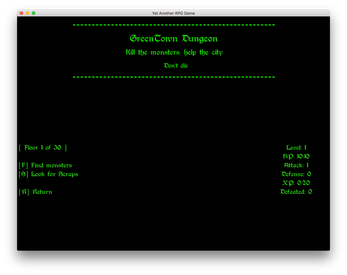 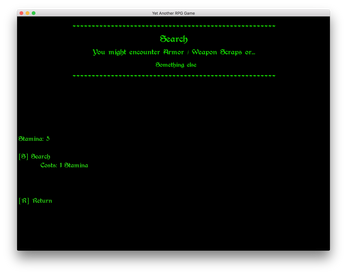 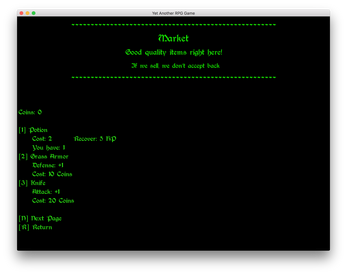 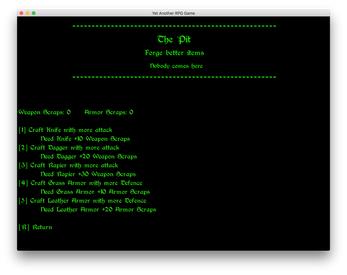 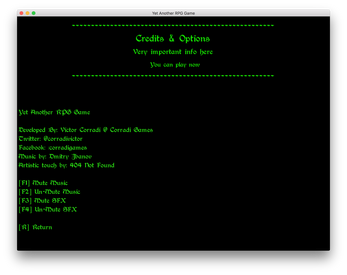